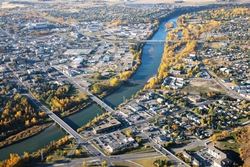 City in Brief: Red Deer is situated midway between Calgary and Edmonton in Central Alberta. It is the province’s third largest city and is surrounded by rolling hills that are home to oil, cattle and grain production. For many years Red Deer had one of the fastest growing economies in North America.

Minimum Down Payment Red Deer: $15,300 (based on average home price)