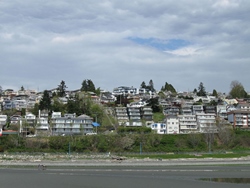 City in Brief: White Rock is a part of metro Vancouver and lies on the shores of Semiahmoo Bay. The city is named for the large white boulder that can be found on the beach near the city’s landmark pier. The city is conveniently situated 50 km south of Vancouver and just 10 minutes away from the Canada-U.S. border.

Minimum Down Payment White Rock: $75,000 (based on average home price)