Below are the lowest mortgage rates that RateSpy is tracking for True North Mortgage. Always confirm the exact up-to-date rate and terms directly with the provider itself.

True North Mortgage is mortgage brokerage founded by Dan Eisner. It's based in Calgary, Alberta, but has offices across Canada and a significant online presence.

True North Mortgage (TNM) was established as a low-rate brokerage and was one of the first mortgage brokers in Canada to routinely buy down rates using its commissions. Today, the company has over 10 locations throughout the country and is the only independent brokerage to own its own CMHC-approved lender, Think Financial.

True North Mortgage is perennially ranked in the top 10 among Canadian mortgage brokers in terms of deal volume. TNM founder Dan Eisner has also received his own share of accolades, having been recognized as Broker of the Year in CMP magazine's Top 75 Brokers list in 2012 and named to Avenue magazine's "Top 40 Under 40" list in 2009.

Because True North Mortgage does more volume than most other brokers, it enjoys volume discounts. That gives it access to the best possible rates from lenders that only a small number of other brokers have.

Additionally, True North notes that its mortgage specialists are salaried and receive no commissions (although they do reportedly receive bonuses). The purpose of that compensation scheme is to reduce the commission bias of the mortgage agent. The company adds that its agents are also "rigorously trained for unified, consistent service."

While some of the lowest rates available are considered "low-frills" products, meaning they come with fewer features and/or potentially higher penalties should you need to break your mortgage early, True North also boasts an array of full-featured mortgage options.

True North is so confident that they can provide the lowest rates in Canada on owner-occupied financing, they offer to pay borrowers up to $500 if they find a better deal elsewhere (see the provider for details as conditions apply).

True North launched its low-rate in-house lender, Think Financial, in 2016. This allowed the company to underwrite its own mortgages at slightly lower rates and generate more renewal revenue.

For newcomers to Canada, both those with permanent residence and those without, True North Mortgage offers a program to help them achieve their homeownership goals.

The program offers access to CMHC and Genworth-insured financing for those with limited credit history and in cases where foreign credit bureaus aren't available.

The program involves no additional fees and no minimum residency periods.

For more information about True North Mortgage's Newcomers to Canada and Non-Residence lending options, contact their mortgage specialists using the form on the left.

Mortgage renewals are typically neglected and put off to the last minute by many homeowners. Being proactive, by starting the process early and being open to switching lenders, can translate into meaningful savings.

As with any lender, renewal is a game that needs to be played right. Tell the lender that True North set you up with, that you're rate shopping on RateSpy. Then ask them for their very best rate upfront. Then compare that rate to what you see on this site.

If their quote is comparable and you're happy with the lender, stay and avoid the re-application process. If their quote is more than 5-10 basis points above the market and you easily qualify elsewhere, consider switching to a new lender. (Note: A 10-bps rate difference is over $1,400 of interest over five years on a $300,000 mortgage.) 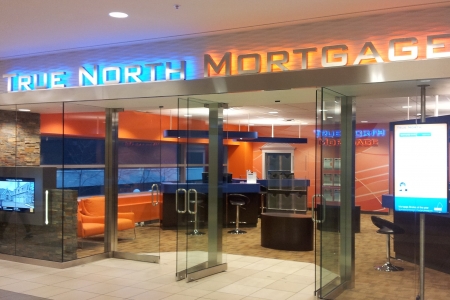 Given the recent increase in home prices in many parts of the country, many homeowners are choosing to unlock the value of their homes by refinancing.

True North can facilitate refinances for a variety of purposes, including:

Well-qualified borrowers can refinance up to 80% of their home's value. True North offers extended amortizations up to 30 years, which can lower your monthly mortgage payments.

True North Mortgage's agents are on hand to help walk you through the options that are available given your financial situation. Ask them a question anytime via the "Ask Question" form on the left.

True North Mortgage can help you tap into the equity in your home for any number of purposes.

They deal with several lenders who sell Home Equity Line of Credit (HELOC) products. HELOCs let you access as much as 65% of the value of your home's market value. You can borrow and reborrow from the revolving HELOC account as needed and it's totally open for repayment with no penalty. You even have a choice of making interest-only payments each month, or larger payments so you can pay it down faster.

The legal and appraisal fees involved in setting up the HELOC vary from free at some lenders (if there are lender legal fee promotions) to $1,000+.

In 2007, True North Mortgage founder Dan Eisner appeared on CBC's Dragon's Den where he pitched the business for investment from one of the Dragons.

He ended up receiving an offer from Jim Treliving, Arlene Dickenson and Kevin O'Leary of a $250,000 loan convertible into 50% of the company's shares at the Dragons' option.

Following lengthy due diligence, Eisner explained that he decided not to proceed with the deal.

"The letter of intent did not include many of the details that we required in order to ensure the ongoing support of the Dragons. We went back to the Dragons numerous times with additional clauses but were repeatedly rebuffed," he noted on the TNM website.

"We could not get comfortable with the level of proactive leadership and tangible management support we would receive from the Dragons in the future given the level of equity we were giving up and the very modest valuation the Dragons were willing to place on this business."

True North Mortgage had no problem growing without help from the Dragons, and now boasts over 10 locations across Canada.

True North offers a number of different mortgage rate calculators that let you do everything from comparing mortgage payments based on different rates, to calculating the total amount of CMHC insurance you would have to pay based on your down payment and rate details. See the company's website for details.

True North is known for opening retail mortgage outlets in high-foot-traffic locations, like the Toronto PATH.

In 2014, co-founder James Laird left True North Mortgage to launch competitor Canwise Financial. The split was reportedly the subject of a lawsuit that was ultimately settled. Canwise is now an arch rival of True North and is owned by rate comparison website RateHub.ca.