Quebec City mortgage rates are moderately competitive versus other cities in the province. These are the lowest rates from providers with offices serving Quebec City. For financing in other parts of the province, refer to the best rates in Quebec. 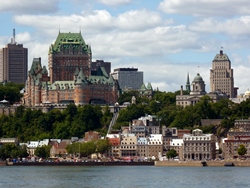 City in Brief: Quebec City is the capital of Quebec and the second most populous city in the province. It is situated along the St. Lawrence River and was founded in 1608, making it one of the oldest cities in North America. The city is a popular destination for tourists who flock to take in the charm of Old Quebec. The city’s fortified walls are the only such walls left anywhere in the United States or Canada and have been declared a UNESCO World Heritage Site.

Minimum Down Payment Quebec City: $13,220 (based on average home price)