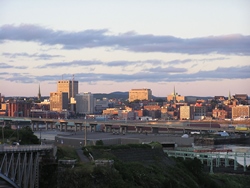 City in Brief: Saint John is New Brunswick‘s largest city as is sometimes referred to as “Fundy City” due to being the only city situated on the Bay of Fundy. It became the first incorporated city in Canada in 1785 and was home to Canada’s first chartered bank in 1830. Canada’s largest oil refinery operates in the city, while other key employers include the Port of Saint John, the Moosehead brewery, and James Ready Brewing Co.

Minimum Down Payment Saint John: $9,420 (based on average home price)

* Note: This page lists lenders with branches in the city and mortgage brokers with registered offices in the city. For a full list of mortgage providers in the province, check the Best Mortgage Rates New Brunswick page. (Image source: Wikipedia)