“Prime rate” is the basis for variable mortgage rates in Canada. The official benchmark is calculated by the Bank of Canada. It generally follows changes to the central bank’s overnight target rate.

What is Prime Rate?

Prime rate is a floating rate that lenders use as the foundation for various lending products, like variable mortgage rates, credit cards and HELOCs.

The prime interest rate typically moves up and down with the Bank of Canada’s overnight target rate. For that reason, some people refer to it as “Bank of Canada prime rate.” That is incorrect because the Bank does not directly set prime. Lenders do.

People also refer to it as the “prime mortgage rate.” In Canada, very few lenders have a separate prime rate for mortgages; TD being one notable exception.

It’s important to remember that each lender sets its own prime rate. For that reason, lenders don’t always follow the Bank of Canada’s lead. In fact, there are multiple cases where lenders have not followed the Bank in dropping prime, much to the frustration of borrowers.

What is the Current prime rate?

Prime rate in Canada is presently 2.45%.

Canada’s benchmark prime rate is based on the “Big 6” banks’ prime rates, including:

How is Prime Rate Set?

Canada’s benchmark for prime rate is published by the Bank of Canada each week. It’s calculated as a mode average of the Big 6 banks’ official prime rates.

What Causes Prime Rate to Rise and Fall?

The Bank of Canada typically hikes the overnight rate (which causes prime rate to increase) when it is worried that inflation could exceed its 3% upper limit.

The Bank of Canada typically cuts the overnight rate (which causes prime rate to fall) when it is worried that inflation could undershoot its 1% floor.

The following table shows a history of Canadian prime rate changes dating back to the start of the millennium.

Since the Bank of Canada started inflation targeting in 1991, the average Bank of Canada rate hike cycle has lasted 2.29 percentage points (as measured from the trough to the peak, as of September 2018).

As of September 7, 2021, economists’ median average forecasts for prime rate are:

*  These estimates are based on RateSpy’s projected spread between prime rate and future overnight rates. Overnight rate forecasts reflect the consensus of major economists, as tracked regularly by Bloomberg. Forecasts are subject to change.

In the long-run, the Bank of Canada projects a normal (a.k.a. “neutral”) overnight rate of roughly 2.75%. That implies a long-run prime rate of 4.95%. But keep in mind that BoC rate forecasts are notorious for being too high.

OIS are derivatives that traders use to bet on the direction of Canada’s overnight target rate.

As of July 14, 2021, market implied policy rates (as tracked by Bloomberg) are pricing in 1.5 rate hikes in the next 12 months. If a hike occurred, Canada’s prime rate could potentially rise to 2.70%.

Note: OIS prices are highly volatile, are subject to change and should not be relied on for mortgage decisions.

Closed variable rates are typically priced at a discount to prime rate. For example: prime – 0.50%.

When Will Prime Rate Change Next?

Prime almost always changes right after Bank of Canada rate announcements. The Bank meets eight times a year. Most of the time, the Bank does not change rates at its rate meetings.

Below is a graph of Canada’s prime rate since the mid-1970s. It typically follows the Bank of Canada’s overnight rate but there have been notable exceptions, most recently in 2015 when Canadian banks refused to pass through 20 bps of BoC rate cuts to borrowers. 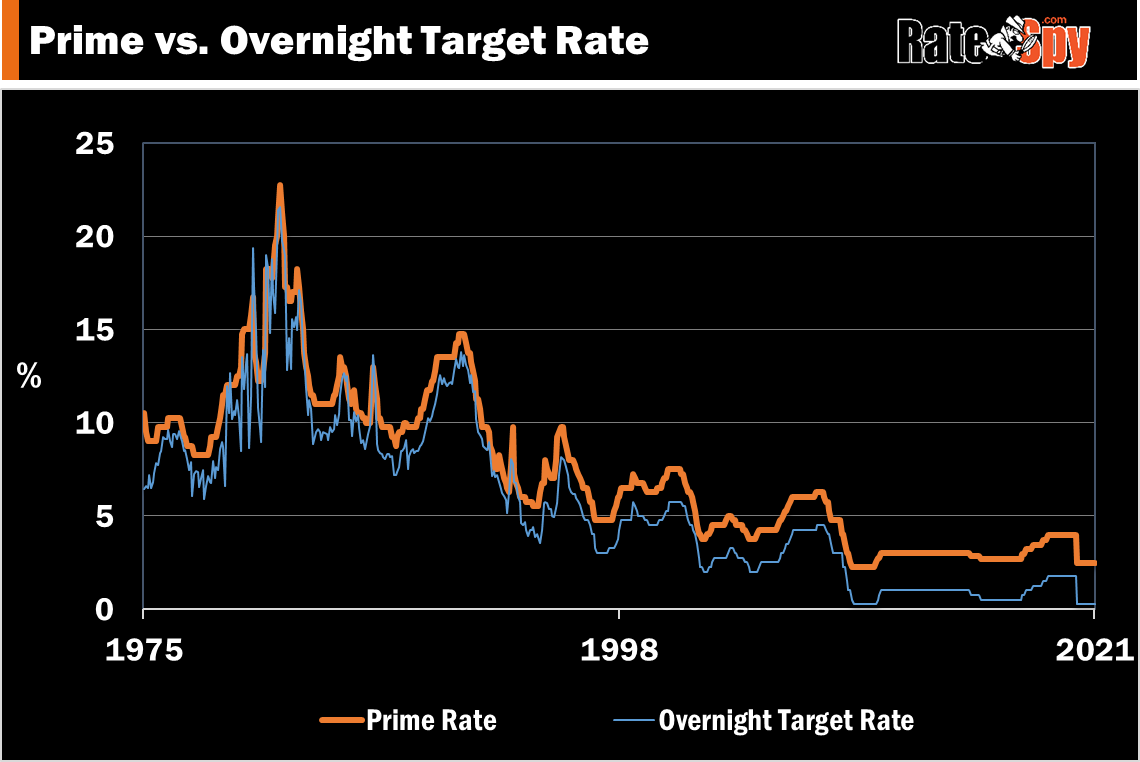