Trois Rivières mortgage rates are moderately competitive versus other cities in the province. These are the lowest rates from providers with offices serving Quebec City. For financing in other parts of the province, refer to the best rates in Quebec. 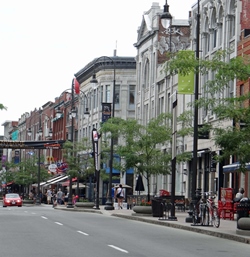 City in Brief: Located midway between Montreal and Quebec City, Trois-Rivières sits on the St. Lawrence River where it meets the Saint-Maurice River. While the city is situated at the confluence of just two rivers, its name, which translates to “Three Rivers,” comes from the fact the Saint-Maurice River has three mouths at that particular point. Trois-Rivières is the oldest industrial city in Canada, but is now reinventing itself with the creation of technology parks, while also taking advantage of its university and port.

Minimum Down Payment: $8,454 (based on average home price)

* Note: This page lists lenders with branches in the city and mortgage brokers with registered offices in the city. For a full list of mortgage providers in the province, check the Best Mortgage Rates Quebec page. (Image source: dadarren.wordpress.com)