Latest From the Rate Front

The mortgage industry’s most-watched number — Canada’s 5-year government yield — is back above its midpoint for the year. As regular readers know, bond yields drive the fixed mortgage rate bus.

The best mortgage rates barely budged this week. Yields have sprung back to life, however, in reaction to:

Further to that last point, many have near-given-up on monetary policy, which has provided less stimulation than a jar of counterfeit Viagra. Our rulers are now praying that Canada’s deep-dive into debt to finance handouts and make-work projects can adrenalize the economy.

“It certainly makes enormous sense for central bankers to pass the stimulus baton to federal governments,” said CNBC’s Ron Insana this week. “If the baton is soon dropped, however, expect interest rates to drop right along with it.”

To get a variable or 1- to 4-year fixed rate these days, lenders make you prove you can afford payments at 4.64%. That “qualification rate” is down 10 basis points since August, but the British Columbia Real Estate Association thinks the trend will turn up.

“…We anticipate that mortgage rates will rise from their current lows with the five-year qualifying rate reaching 5% by the end of next year,” the Association said today. It believes higher U.S. rates and stricter capital requirements will boost fixed mortgage costs in Canada.

We have to really scratch our heads to remember the last time any economist predicted lower rates one year out. Been a while.

Either way, only about 1 in 10 borrowers have a high “gross debt service” ratio (i.e., their housing costs divided by income exceeds 35%). Hence, a negligible one-third point rate increase wouldn’t shut out many borrowers from qualifying for a short-term or variable mortgage.

When it comes to 5-year fixed mortgages, homeowners can qualify at rates as low as 2.00%-ish. That lets people get bigger mortgages than if they had to qualify at a higher posted rate. There are rumblings that regulators may rain on the parade by making all borrowers prove their ability to afford posted-rate payments. That, in turn, would force more people into smaller mortgages in order to meet debt ratio limits.

Chart of the Week

This week’s rate-bearish graph comes courtesy of B of A. Canada’s growth has become as dependent on homebuilding as a suckling on a teat. Until we find something to replace housing’s economic contribution, growth could flounder, which ultimately could put another smackdown on mortgage rates. 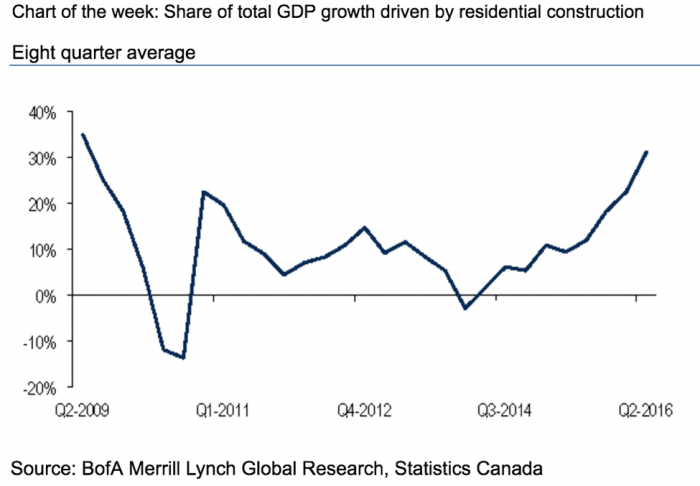