The benchmark rate is an important number used by lenders to qualify you for a mortgage (i.e., calculate how big of a mortgage you can afford).

It’s also used as the basis for:

•   Rate guarantees – This applies predominantly to the retail (non-broker) channel where many lenders still price off the posted rate, and offer the lower of the rates available at the time of approval or closing.

The benchmark qualification rate applies to people getting mortgages with either a variable rate or a term less than five years, at a federally regulated lender–like a bank. (The method differs for people getting fixed mortgages with a 5-year term or longer. For those folks, lenders still qualify them using the actual rate of their mortgage.) 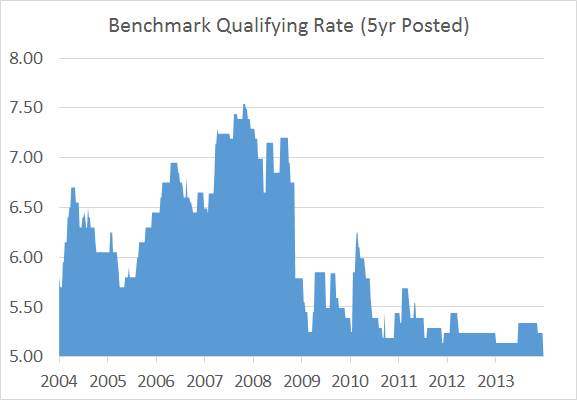 Here’s an example of how the new 4.99% qualifying rate affects things.

Put another way, variable and 1- to 4-year fixed borrowers can now qualify for roughly a 2% bigger mortgage.

More about the Benchmark Rate

•   It is calculated as a mode average of 5-year posted rates advertised by the six biggest banks (BMO, CIBC, National Bank, RBC, Scotiabank and TD) at noon Eastern time each Wednesday.

•   The Benchmark rate is posted on the Bank of Canada’s website every Thursday by approximately noon Eastern time.

•   Why didn’t other lenders drop their 5-year posted rates sooner? One reason, according to a banker we spoke with, was that “Lenders were very resistant to dropping (the 5-year) posted rate because of what it might do to their pipeline” (e.g., it would have forced some lenders–who price rate guarantees off posted rates–to offer lower rates to people at the time of closing, in cases where rates fell after those people had applied).