President Trump has figured out how to get his way and force more rate cuts out of the Federal Reserve: Create trade panic.

Trade wars—exacerbated last week by Trump’s latest gambit—could cost the global economy up to $1.2 trillion and pressure the Fed to cut rates more than expected.

Given the market hates uncertainty, bond rates have plunged. Canada’s 5-year bond yield is down a hefty 15 basis points from Friday. That’s the lowest since June 2017. If we closed at these levels, it would be the biggest one-day plunge in yields in over four years. 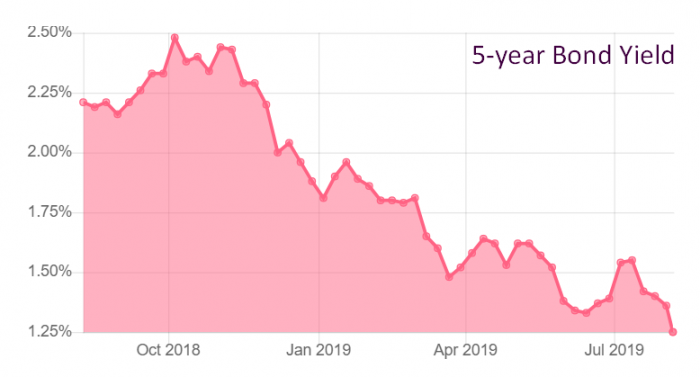 If the 5-year bond ends the week at these levels, we could easily see a downtick in the lowest 5-year fixed mortgage rates. It may happen regardless.

A 25+ basis point cut from the Fed on September 18th is almost guaranteed, if you believe bond market derivatives pricing.

Canada’s economy usually follows in the footsteps of the U.S. so the Bank of Canada will be under increasing pressure to cut its own key rate, if the Fed lowers again. The next BoC rate meeting is September 4. The market is now pricing in just a 1 in 6 chance it’ll yield any movement in our overnight rate.

As for the next BoC cut, it’s now expected in January (don’t read too much into this as market-implied rate changes fluctuate constantly).

Five-year fixed mortgages continue to be priced 10-15 bps below variables, and probably for good reason. The market seems to be signalling that the worst is yet to come for Canada’s economy, portending lower rates long-term.

Here’s the latest on floating rates:

There’s no way to know if/when the Bank of Canada will get to zero. But, other things equal, as long as:

…Canadian bonds will attract ample demand. That’ll weigh on rates until such time as inflation expectations surprise to the upside.