Debt ratios are rising, but it’s not just because borrowers are taking on more debt.

They’re rising because the government changed the rules of the game. Last October it made all insured mortgage borrowers prove they can afford a payment at the 5-year posted rate (currently 4.64%). Those artificially higher payments (coined the “stress test”) have increased people’s debt ratios, at least on paper.

Numbers from Canada Mortgage and Housing Corporation (CMHC) are now bearing that out. 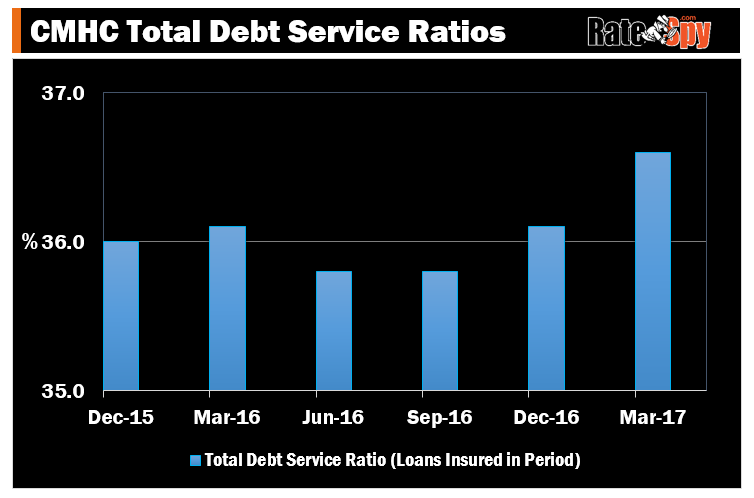 Average total debt service (TDS) ratio jumped half a percent from Q1 2016 to Q1 2017. Given this number hasn’t changed much for ages, “a variation of 0.5% points (or more) is…considered important,” says CMHC spokesperson Audrey-Anne Coulomb.

But more than that, there were big shifts in the distribution of debt ratios. For example, in Q1 2016, 16% of new CMHC-insured borrowers had a TDS ratio of 30% or less. Fast forward 12 months and that distribution is down to 13%, a material 2.6 percentage point decline.

What this means, in part, is that it’s getting harder to qualify for an insured mortgage.

At least 1 in 5 new borrowers can no longer pass the aforementioned stress test, based on their desired purchase price and property characteristics. (This is our best guess based on government estimates, as no one tracks the number of willing homebuyers who can’t meet CMHC’s 44% TDS limit.)

So if you’re making less than a 20% down payment, keep all of this in mind. Some of you out there will have to buy a cheaper property than you thought, defer your purchase, scrape together a bigger down payment and/or find a co-signor.