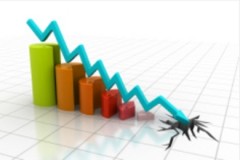 Interest rate projections are always a moving target so you never want to rely on them. But it’s nonetheless notable when forecasts from all major banks plunge at once.

That’s what happened recently, after the Bank of Canada (BoC) unexpectedly chopped rates by 1/4% on July 15.

Prior to that rate announcement, Canada’s Big 5 banks all saw Canada’s key rate climbing to 0.75% by the end of this year.

Soon after the BoC’s move, however, the banks changed their tune—dropping their year-end forecasts to 0.50%, where we now sit today.

Expectations for rates at the end of 2016 have changed even more dramatically, as the following table shows:

“While we expect the Bank of Canada will remain on hold through 2016 with core inflation currently above 2%, there is an increasing risk of an even more accommodative policy if the country’s economic underperformance persists,” Scotia Bank economists wrote in a September 1 research note.

Mortgage shoppers are always looking for direction on rates. So you’re probably wondering what this shift in expectations really means.

For one thing, know that you could probably guess the direction of rates as well as a professional economist, who’s bound to be wrong roughly half the time. So don’t place your bets on the actual numerical forecasts above.

It’s the general trend in consensus that is more telling. Economists clearly believe that something is still wrong with Canada’s economy, and despite our post-recession GDP recovery, they’re likely right. North America’s economic data of late has been a mixed bag at best, and the last thing our central bank wants to do is jump the gun on monetary policy tightening, especially coming out of a recession. That and continued fragility in the oil market hints that rates could stay low for several months to come.

Indeed, the once “inevitable” 3- to 4-percentage point bounce-back in rates may have already given way to a lower “new normal”, meaning an overnight rate of just 2.00% +/-.  The banks’ latest forecast revisions now reflect that.