This Is Not the Time to Gamble on Rates

“Lower for longer” has become the mantra in the rate market. But mantras don’t last forever.

Combine this with Ottawa’s regulatory changes, and suddenly today’s record-low 5-year fixed rates look like a steal (more on that).

But if you want one, get em’ while they’re hot. Odds are this is no flash-in-the-pan spike in yields. Over the last week, Canada’s 5-year yield—which steers fixed mortgage rates—has surged the most since mid-2013. That’s when the U.S. Federal Reserve announced it would slow its U.S. bond buying (i.e., “taper” quantitative easing). 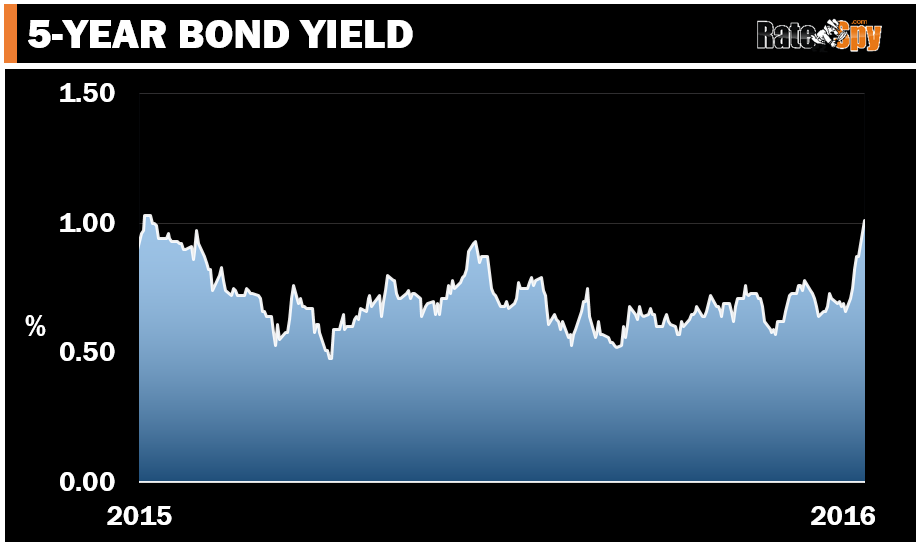 This “taper tantrum,” as it was coined at the time, caused our 5-year yield to rocket 70+ basis points in just three short months during the summer of 2013.

The start of this current move looks eerily similar.

A few lenders have already announced higher 5-year fixed rates (up to 15+ bps), effective at midnight tonight. More will follow.

If you’re mortgage shopping and have:

…you cannot go wrong with a deep discounted 5-year fixed rate, especially if you can find one near 2.14% or less. Variables and short-term rates simply don’t give you enough protection for the potential rate risk they now pose.

If you’re mortgage shopping and have:

…there’s still value in the 1-year fixed and 2-year fixed space. You’ll save at least 1/3 of a point up front versus a 5-year fixed and have more flexibility in the event rates drift back down.

If you already have a short term or variable-rate mortgage…

…do not lock in unless you know you can’t handle (the thought of, or the actuality of) a 10%+ hike in your monthly interest costs. Certain disinflationary supertrends like demographics, technology, high debt loads, etc., will absolutely limit how much rates can rise over the long-run.

Moreover, most lenders overcharge you when you convert from a variable to fixed. I just saw one bank quote 2.60% to a well-qualified client who wanted to lock in her variable. They might as well have reached into her bank account and stolen $5,000 (the extra interest she’ll pay versus typical 5-year rates).

Also keep in mind that Trump’s U.S. stimulus won’t benefit Canada near-term. So if the Bank of Canada did take variable rates higher, it likely wouldn’t happen for several months, if not quarters.

And then there are the wild cards. Unforeseen trade barriers, a global crisis (and no, not nuclear war, you anti-Trumpians) or plunging oil prices could be deflationary for Canada, and for Canadian rates. But these are potential catalysts whereas Trump’s economic growth is a known catalyst. That’s why now is not the time to gamble on variable or short-term rates…for most new mortgagors.