Rates Up. What Now?

Those of you shopping for a mortgage can be forgiven for cursing the Federal Reserve. The U.S. Fed is hinting that December will mark its first rate hike in nine years. Most interest rate traders are thinking it’s a done deal, which in turn is pushing up Canadian mortgage rates.

Have a look at what Canada’s 5-year bonds have been up to lately. 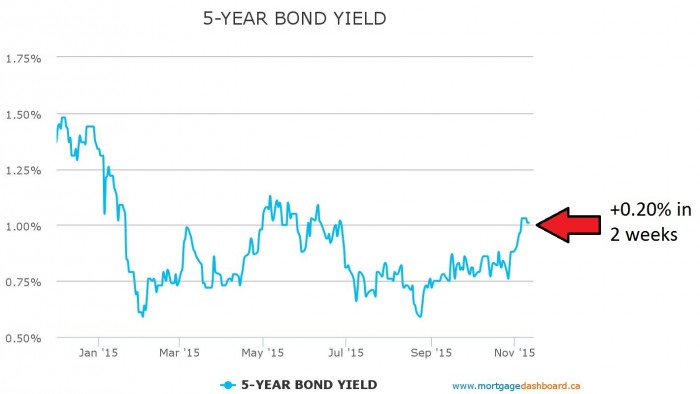 That recent spurt in yields has motivated lenders to jack up fixed rates anywhere from 5 to 15 basis points (a basis point is 1/100th of a percent). That’s increased borrowing costs by $235 to $705 over five years, for every $100,000 of mortgage.

Where we go next is the big question. Keep an eye on the 1.20% mark for the 5-year yield. A close above that level should send 5-year fixed rates closer to 3%.

Speaking of which, remember when 2.99% was a good rate? We’ve been so spoiled by 2015’s mortgage market. It’s easy to forget how quickly rates can climb. Back in April 2013, 5-year fixed rates shot up 60+ basis points (0.60%) in just a few months after the Fed said it planned to slow its bond buying. Today the market is pricing in about 70% odds of a Fed hike on December 16. If that gets near 100%, chances are good that Canadian yields (and fixed rates) will take off—at least for a little while.

But fixed rates aren’t all that’s moving. Variable discounts have also been shrinking. The banks are moving en masse to improve variable-rate profitability in light of competition for deposits (which hurts variable mortgage spreads), a tick up in bankers’ acceptance yields (which track some lender’s funding costs), higher market risk and liquidity premiums (demanded by floating-rate mortgage investors).

So if you’re looking for variable-rate bargains in the near term, know that the odds of discounts shrinking further are greater than the odds of them improving.

The chart below shows the average best rates for each mortgage term on RateSpy.com. It paints a good picture of the rate premium you’ll pay for the security of a fixed rate and/or longer term. 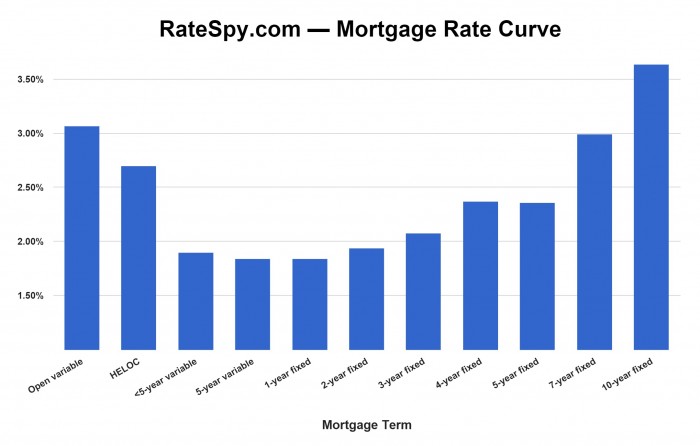 At the moment, all rates under six years are still remarkably cheap.

And for those who say:

Their Magic 8 Ball is no better than yours. The truth is this: Negative interest rates (yes, negative rates) have become “normal” in a growing number of developed countries. There are global trends at play there (not the least of which is falling oil) and those same trends impact Canadian rates, to at least some small extent.

Even when rates finally do ascend, Fed chief Janet Yellen expects them to follow (read: wants them to follow) “a very gradual path” higher. Given that expectation, and the low probability of inflationary threats, there’s a reasonable chance that “happy medium” terms like the 3-year fixed (at 2.09% +/-) could outperform a 5-year fixed. The reason? You still get some rate protection and after maturity in three years, you’ll potentially be able to renew into a reasonably priced variable or short-term mortgage—thus keeping your five-year average rate under today’s typical 5-year fixed rate. (Note: This strategy is for financially secure borrowers who can handle the potential risk of higher payments in three years.)

We’ll close with this: If you’re betting on continued low rates, you still have to prepare for high rates. Check how much your mortgage payment could rise with the Spy’s mortgage renewal payment calculator. Then be confident that your future budget can withstand it. If the thought of renewing at a 5.00%+ rate makes you reach for the Gravol, you may well need a smaller mortgage and/or a longer fixed term.