The Threat of 10% Higher Payments 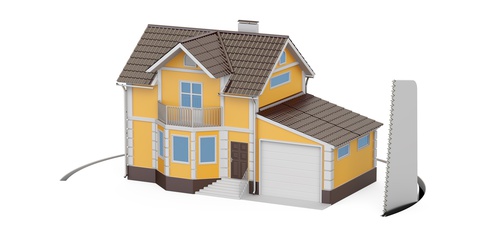 This number is likely inflated by the fact that some survey respondents can’t accurately quantify what a 10% payment hike would do to their budget. Since the average mortgage is $201,000, a 10% payment jump works out to $106 a month (on average), assuming a 20-year amortization. To most people, that’s not a colossal dollar increase.

What it Really Means

We asked Manulife Bank CEO Rick Lunny to explain what this stat means in practical terms. Here was his take:

“The key is, this is what people feel they can’t afford…I think the reality is, they’d have to adjust their lifestyle [if their payment rose that much].” 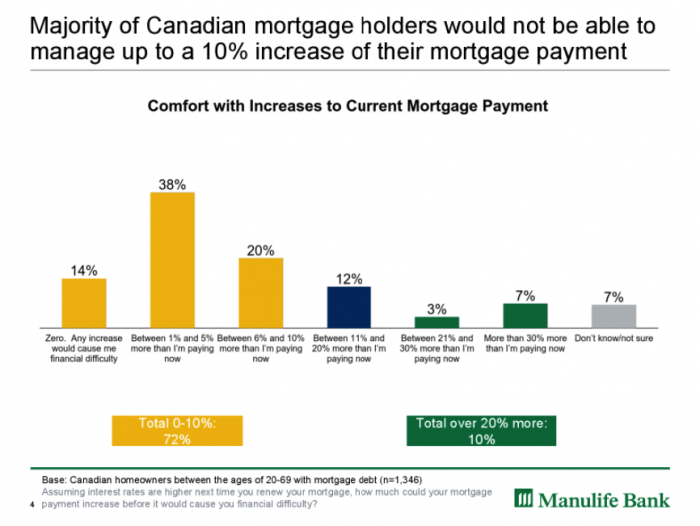 Lunny says that if payments were to jump 10%—which would take more than a one-percentage-point rate hike, other things equal—mortgage default rates would not be extraordinarily higher. In other words, they’d likely remain in the low single digits or less.

But in an economic shock, mortgage arrears could very well could be higher than the past given today’s higher consumer debt burden. (Note that just 3 out of 1,000 mortgagors are 90 days in arrears today, and the all-time national high was about 10 in 1,000 in 1983, according to CMHC.)

That said, “Canadians have shown the flexibility in the past to meet rising interest rates,” he added. “Back [when] mortgage rates were 18%, you look back at the default rates, and they did not increase substantially. The biggest driver of default on mortgages is unemployment.” 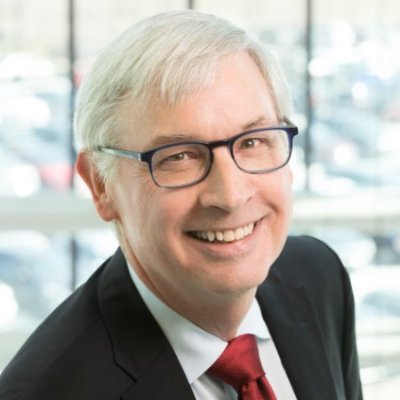 I asked Lunny if a bank should approve someone if it knew that person didn’t think they could afford a 10% payment increase. “We approve [borrowers] on a basis of whether we feel they can meet the mortgage payments,” he said. That means the borrower’s debt ratios must fit within accepted guidelines (no more than 35-39% of gross income can go towards housing expenses), their income must be provable, they must have strong credit, etc.

If a borrower is putting down less than 20%, they also have to prove they can afford a payment that’s 25% higher (this percentage changes as the Bank of Canada’s posted 5-year fixed rate changes).

Folks putting down 20% or more may or may not have to prove they can afford that higher payment. It depends on whether their lender insures its mortgages. Insured mortgages must, by regulation, be stress tested.

I also asked Lunny what type of mortgage might be most suitable for someone worried about their payments rising.

“I always recommend first-time homebuyers, who usually are stretched…lock in the maximum amount of their mortgage.”

For conventional borrowers with 20%+ equity, he generally recommends a two-part mortgage—i.e., a mortgage plus a HELOC—particularly an interest-offset HELOC (which Manulife just so happens to offer).

An interest-offset HELOC allows for two benefits, he says:

1) any spare money, like your paycheque, goes into your main HELOC account to offset (reduce) your debt, and hence reduce your interest costs. (“There’s always a benefit to having at least a small portion of flexible debt,” maintains Lunny.)

2) you have the financial flexibility to re-borrow from the LOC if interest costs soar and you’re short on cash temporarily. (“It’s part of having the ability to meet unexpected expenses,” he says.)

In some cases, borrowers with HELOC room may be better off having no cash emergency fund, he says. That way they can invest their savings at a better return and borrow off the HELOC in emergencies. “It comes down to individual situations but [this approach] could be very cost effective to ensure that you don’t have…unutilized money lying around.” Just don’t put your rainy day fund in high-risk investments, he warns.