Bond yields dove to a 6-month low yesterday on fresh reports of White House scandals and a stock selloff. Here’s the chart: 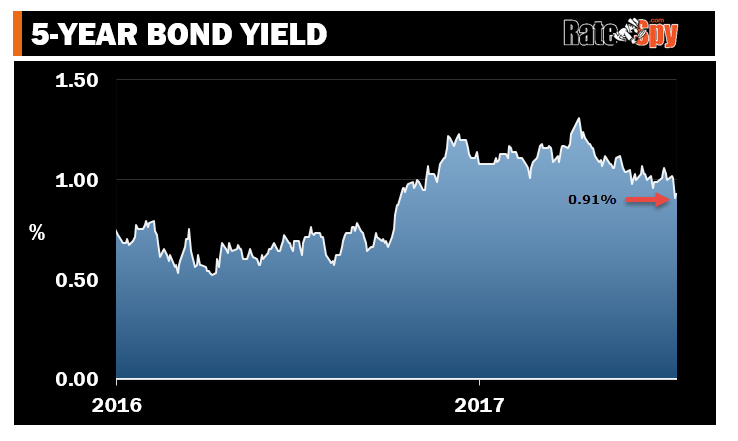 This dip in yields was triggered by investor concerns about the fate of Trump’s presidency, especially his big fat tax cuts. If the U.S. doesn’t get tax relief and infrastructure spending, inflation and borrowing demand will likely remain low. That, of course, would suppress interest rates.

All of this could translate into short-term savings for new borrowers. The 5-year yield typically guides fixed mortgage rates. In fact, 5-year fixed rates have averaged about 160 basis points over the 5-year yield for the last six months. Unless yields rebound soon, it’s very possible we could see typical 5-fixed rates drop from 2.59% today to 2.49% in the next week or so.

Now, as we’ve been saying for a few months, you can forget about meaningful rate increases until the 5-year yield shoots above 1.33%. And, of course, none of this has any immediate relevance to variable mortgage rates, which key off the Bank of Canada. Governor Poloz & co. are quite satisfied to sit on their hands until later this year…maybe longer.