47% of Mortgages Will NOT Renew This Year

It turns out, we weren’t sniffing glue by arguing that 47% of mortgages are not up for renewal this year.

“Some pundits have been circulating inaccurate information recently,” National Bank Financial (NBF) said in a report Thursday. “One is the affirmation that almost half of Canadian mortgages have been or will be up for renewal this year, suggesting an imminent payments shock from the rise of interest rates.”

It all started with this admittedly confusing chart published by the Bank of Canada last November. 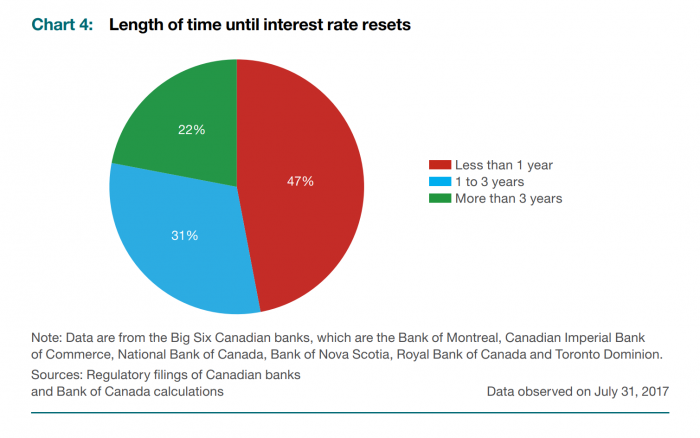 But 47% of mortgages renewing this year just never made intuitive sense given 1 in 4 mortgagors choose terms less than five years, according to Mortgage Professionals Canada.

“This [47% figure] is false…That proportion estimated by the Bank of Canada last year is actually the proportion of mortgages subject to interest-rate rises from August 2017 to July 2018…,” NBF says. “Since the great majority of mortgage borrowers opt for 5-year terms, whether fixed rate or variable-rate, it’s hard to imagine much more than 20% of mortgage debt coming up for renewal each year, and that is what our sources show.”

As for renewers this year, “Our staff estimates that roughly 25% of mortgages will be renewed this year, in line with historical norms,” says Bank of Canada spokesperson Josianne Ménard.

“The 47% figure highlighted in Chart 4 of the November 2017 edition of the Financial System Review refers to the percentage of mortgage holders who would face higher rates in the next 12 months if rates were to increase,” Ménard adds. “In addition to households renewing their mortgage, this includes households with a variable rate mortgage (who are not renewing their mortgage in the next 12 months).”

As for rate hikes causing a national catastrophe, NBF writes:  “…The aggregate interest bill for households exposed to rate increases amounts to 0.33% of disposable income in 2018 and 0.37% next year. However, a rise of the interest bill does not mean an equivalent rise of payments. First, the increase in the payment at the time of renewal is about 60% of the increase in the interest bill. Moreover, about 40% of variable-rate mortgages have payments that are fixed over the term (mostly five years), again suggesting a gradualizing effect on the rise in payments.”

On top of that, the bank points out that real disposable income has risen about “2.5% annually over the last 10 years.” As usual, unemployment/underemployment is the biggest threat to borrower survival.

In any case, it’s good to see this fallacious 47% stat cleared up. Hopefully it gives housing/debt cynics more comfort to peek outside their fallout shelters, as rate hikes won’t be nuking the economy just yet.

Like news like this?
Join our ratespy update list and get the latest news as it happens. Unsubscribe anytime.
Tags: Bank of Canada, mortgage trends, rate research