The deluge in yields continues.

Canada’s benchmark 5-year yield just hit its lowest point since June. The last time we saw this kind of carnage was January 2015. Back then, the Bank of Canada made emergency rate cuts to stave off the oil crisis. 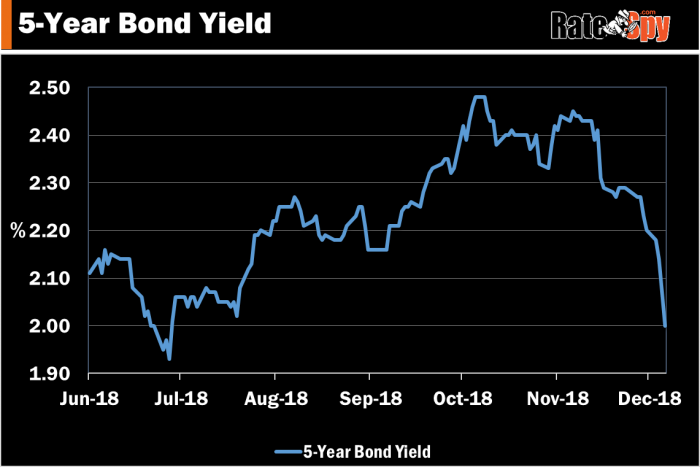 Implied odds are slim that the bank will reverse course and lower its key rate near-term. But that isn’t stopping bond traders from thinking it could.

In fact, BoC Governor Stephen Poloz said this morning that the current Canadian oil “shock” (yes, he called it a shock) is not as extreme as the 2015 variety, but it is “meaningful” to inflation, and hence rates. He said the BoC is evaluating it and wouldn’t comment on whether it might warrant a rate cut in 2019.

As of this morning, however, none have. Banks are okay with testing borrowers’ patience.

And patience may be all it takes. Whenever there is a waterfall plunge in yields, it can take several quarters or years to make a new high once again. So banks won’t be able to justify their currently inflated spreads for long.

The high-water mark for the 5-year yield is now 2.50%, the 7.5-year high that was made just two months ago. Based on historical data, it would be statistically improbable for yields to exceed that level again until late 2019, if it happened at all next year. (The yield curve now suggests it may not.) 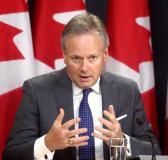 This morning, Poloz was asked how much this might delay the return to “neutral” on rates. His response was, it’s “data dependent…that’s it.”

In other words, all these rate hikes the market has been expecting are by no means assured.

“…Most of our data points have been on the disappointing side,” Poloz admitted. And despite the bank’s recent annual research on the neutral rate, which peg neutral at 2.50% (75 bps higher than today) or more, it’s hard to tell where neutral is until you’re there.

The truth is no one can say for sure that we’re not at neutral already. Neutral is the rate that doesn’t stimulate or quell the economy. And Canada’s economy doesn’t feel overstimulated, not anymore. And let’s not forget that economic shocks can change neutral tout suite, as Poloz reminded everyone today.

For that matter, no one can say that bonds haven’t over-reacted. All we can do is bet the odds, and for well-qualified borrowers, the odds have now indisputably improved for variable rates.