Check out this chart below. It shows Canadian oil (a.k.a., Western Canada select, or “WCS“) rapidly cheapening versus higher-demand “WTI” oil from the U.S. This is a record discount. 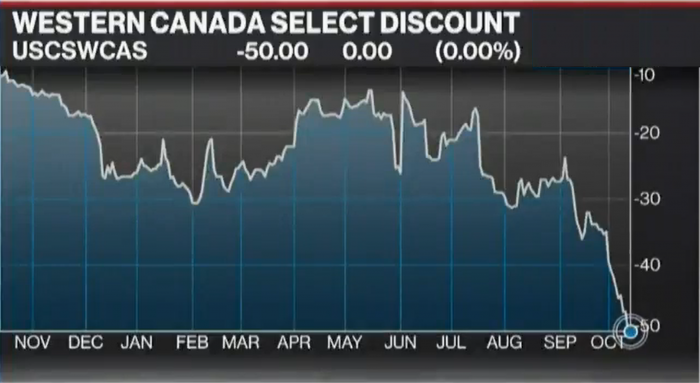 Its thickness, inferior quality and delivery challenges mean Canadian oil always trades at a discount to WTI (roughly $15 cheaper on average over the long term, says BNN), but this is cray-cray.

Why You Should Care

This is no joke. Sinking WCS could shave a whopping 0.7 per cent off our national GDP (or more), according to recent estimates by the Fraser Institute.

Keep in mind, Canadian oil prices are highly volatile. This spread will likely rebound in the not-too-distant future, say analysts.

Moreover, WCS is just one input affecting interest rates. But it’s a meaningful input when the moves are extreme. For those reasons, this crash in WCS could eliminate one or more Bank of Canada rate hikes. And that’s variable-rate friendly.