Distress in Money Markets Greatest Since 2009

Prior to the last few days, consumers had expected falling Bank of Canada rates and lower bond yields to translate into cheaper mortgage rates. And they have, big-time.

But these two benchmarks aren’t the only things that determine mortgage pricing. Borrowers were reminded this weekend that liquidity and credit risk are also in the equation.

Ten days ago we noted that mortgage rates were diving, but that liquidity constraints could potentially inflate lenders’ costs, and mortgage rates. Liquidity refers to how easily (and cheaply) banks can raise capital. Illiquidity in the banking sector is always bad news for mortgage rates.

Well, it’s happening. Gauges of how willing banks are to lend to one another have deteriorated rapidly. Here’s one such measure: 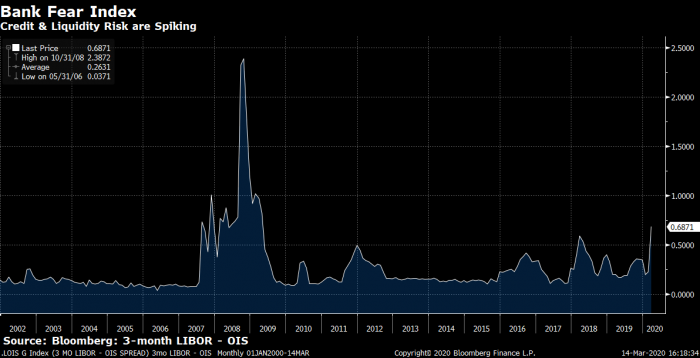 Without boring you over details, suffice it to say this chart shows investors are becoming more fearful of credit defaults and illiquidity in the banking system.

It’s not coincidence, then, that some banks are slashing their variable-rate mortgage discounts to pad revenues. Scotiabank, for example, hiked its 5-year published variable rate by a whopping 60 bps on Saturday, to 3.45%.

We’ve seen these shock-and-awe rate moves before. On October 6, 2008, in the midst of the credit crisis, TD shocked the market with a massive 100-bps rate increase to prime + 1.00%. It applied to new variable and HELOC customers. TD rates were below prime just days before.

Today, even fixed rates are rising at some lenders, and the pop in bond yields on Friday didn’t help. Albeit, the fixed-rate impact is nowhere near as pronounced so far.

How Long Could It Last? 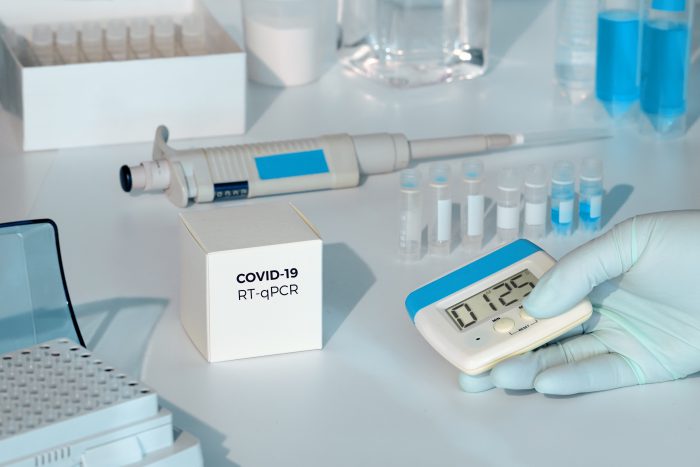 When the Bank of Canada cuts rates—particularly if they’re emergency cuts or leading into recession—it doesn’t start hiking again for over two years on average. That’s based on a historical lookup back to the start of inflation targeting in 1991.

If a downturn is bad enough, like the Great Recession, subsequent rate increases can be modest—allowing variable-rate holders to outperform 5-year fixed terms, despite the hikes.

Results are heavily inflation-dependent, however. And there’s no way to forecast inflation in 2021 or 2022, as we don’t know how much economic damage CVirus will do.

What we do know is that once the virus is under control there, will be a king-sized rate rally thanks to pent-up economic demand. If history is a guide, that rally could be 100 to 200+ bps. If credit markets seize up enough, we could even see rates jump before the recovery. That’s the risk you take with a variable.

That said, recessions are never bullish for mortgage rates. Even if a floating-rate borrower gets caught in an eventual rate rally, there’s a solid chance their 5-year borrowing cost will come in lower than a typical 5-year fixed mortgage.

Of course, rate timing is a well-known form of masochism. The market exists to frustrate rate timers. When selecting a mortgage term, it’s much better to focus on factors we can control. (For examples, see: Fixed or variable?)

“We are coming to the view now that because of the virus and the meltdown in financial markets, we will most likely see a decline in buying activity through at least parts of the spring market, and maybe even going into the summer market,” said RBC Economics.

If buyers stay on the sidelines and sellers get spooked, Canada could witness the fastest reversal in its sales-to-listings ratio since the financial crisis. 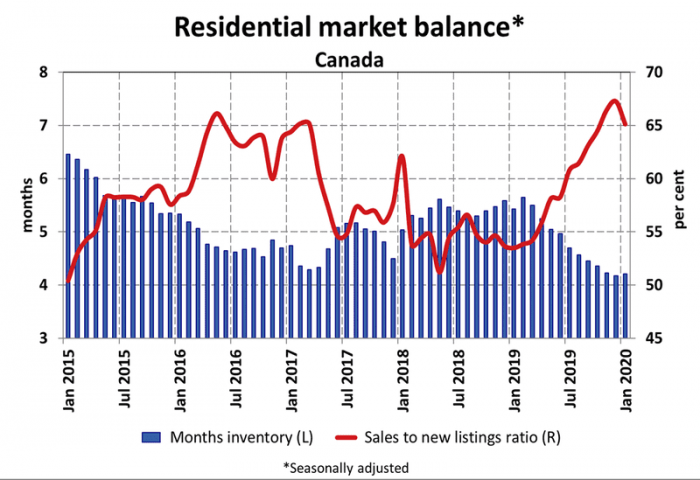 South of the border, 16% of Realtors report seeing a drop in buyer activity, according to the National Association of Realtors. In harder-hit states like Washington, the number is almost 20%. But, just 2% of Realtors report more listings in their markets as a direct result of Covid-19. (Note: This survey is 5-6 days old.)

As you saw in the 3-month LIBOR – OIS chart during the previous section, credit market panic is nowhere near as extreme as the 2008 crisis. It would be drastically premature to suggest it will be, although a further spike is likely.

Economic panics almost always dissipate in a year or two. Despite being a health pandemic as well, North America has got through worse. Civilization (and the stock market) quickly recovered from the far more deadly 1918 Spanish flu, which infected about 1/4 of the U.S. population, killed over half a million Americans (tens of millions worldwide) and cut life expectancy by 10-12 years in 1918, according to some estimates.

Human resiliency is worth remembering when contemplating a home purchase. No question, it’s going to be a bumpy ride through the end of this year. But financial and real estate markets will again see daylight.

Like news like this?
Join our ratespy update list and get the latest news as it happens. Unsubscribe anytime.
Tags: coronavirus, economic news, fixed or variable, mortgage trends