HELOCs Under the Microscope Again

HELOCs have been getting a bad rap ever since the FCAC proclaimed in 2017 that “home equity lines of credit may put consumers at risk.”

Bank of Canada Governor Stephen Poloz then followed soon after by including HELOCs in a speech about what keeps him up at night.

Policy-makers’ concern is that HELOC rates are rising and people are using them to overborrow. CMHC recently released new data on this latter point and here’s what it found:

Clearly, policy-makers are worried about HELOCs. As we’ve speculated before, it’s possible we’ll eventually see new rules to either trim their usage or make them harder to qualify for. The more you see governmental agencies like CMHC, FCAC and the Bank of Canada issue negative reports about secured credit lines, the greater the odds of that happening.

“The use of these credit lines can lead to greater persistence of indebtedness and wealth erosion as homeowners tap their home equity,” CMHC said in this latest report. “Higher debt-service costs could become problematic for deeply indebted households during periods of rising interest rates.”

“This type of debt can also become more problematic during periods when house prices decline. HELOC loan limits could be reduced, or the loan could even be called (since they are demand loans).”

On the Other Hand

“HELOCs are also less risky and have substantially lower delinquency rates compared to other consumer credit products,” CMHC acknowledges. Lenders are also more cautious when underwriting them due to their revolving borrowing privileges, interest-only payments and lack of a defined term.

Moreover, HELOC utilization (balances divided by limits) has been downtrending, as you can see in this chart. 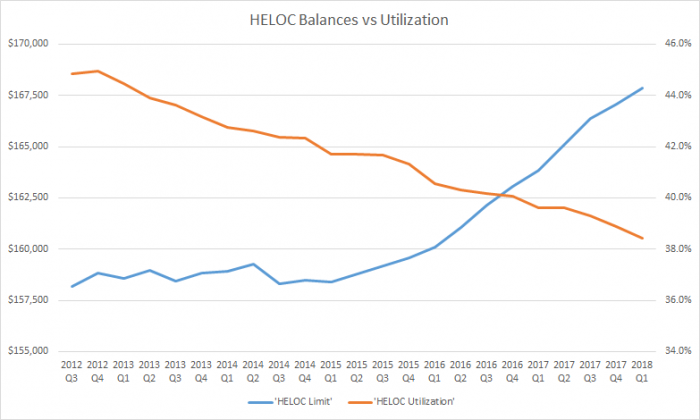 Overall, average HELOC limits are up 5.8% in the last five years. That’s not surprising since housing prices are up 25% and HELOCs are often sold as a percentage of the applicant’s home value (most commonly, 65% or 80%).

But look at utilization. It’s down 13.5% since 2013. Consumers are by no means going hog wild and tapping the bulk of their growing home equity. Indeed, OSFI’s B-20 “stress test,” which took effect January 1, has made qualifying for HELOCs harder than ever.

To suggest HELOC borrowing is a serious systemic problem is therefore premature. This is a segment of the lending market that requires no additional regulatory action at this time, but may very well attract some.

Sidebar: CMHC’s “Homeowner’s Debt at a Glance” report, upon which this story is based, uses Equifax data, which covers about 85% of Canada’s total mortgage market by value.