“It does look as though [rate] cuts have done their job.”

That was Bank of Canada chief Stephen Poloz in a CNBC interview today. It was the second time he’s provided this “forward guidance,” and it’s about the closest thing you’ll hear to him saying “rates are headed up — soon.”

Poloz’s statement was “the final straw” for BMO. It triggered a change in its forecast for the first rate hike in seven years. BMO now expects it next month, at the BoC’s July 12 rate meeting. Less than 30 days ago BMO was predicting April 2018.

Not everyone’s on the same page for July, though. Most econo-pundits are fortune-telling that hikes won’t start until (at least) later this year.

Either way, most mortgage shoppers will now be factoring in higher rates when selecting a mortgage term.

What the Bond Market Says

Bond yields, which drive fixed mortgage rates, have surged on the BoC’s sudden hawkish tilt. The chart below shows today’s high, which reached 1.32%. 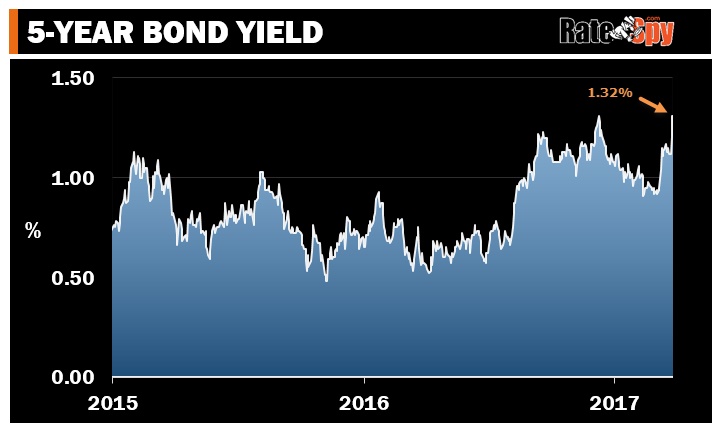 As per the Spy’s prior bulletins, lots of things (falling oil prices, U.S. trade barriers, persistently weak inflation, international incidents, a big housing selloff, a hostile move by the wingnuts in North Korea, etc.) could keep rates low, or even force eventual rate cuts. So erase any visions of prime rate doubling in the next five years. It’s just not a bet worth making.

In the meantime, it does look like the path of least resistance for rates is up, so here are four tips on how to play it: