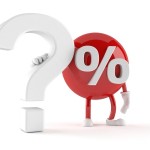 One of the worst things a mortgage shopper can do is assume that a lender’s rates are competitive.

For evidence of that, look no further than the latest data from our nation’s largest default insurer, CMHC. It reports that borrowers who closed insured 5-year fixed mortgages in the third quarter of 2014 paid an average rate of 3.37%.

That’s somewhat remarkable when you realize that the lowest rates at that time were about 2.72%. What could account for such a wide rate gap?

Well first there are the logical explanations:

But this 0.65 percentage point rate gap is not solely explained by the above. There’s something else going on here, something called rate complacency.

2010 statistics from the Canadian Association of Accredited Mortgage Professionals—the latest such data available—found that 4 in 10 Canadians got just one quote when obtaining a mortgage. That’s like calling a hotel and booking a room at “rack rates” instead of price shopping on a travel website. In fact, it’s way worse. Bank of Canada research finds that the additional markup paid by a mortgagor who doesn’t comparison shop is over two times that of someone who does.

Believe it or not, thousands of homeowners still sign their lender’s renewal letter and send it back. This is the mortgage world’s deadliest of sins. Many lenders use renewal letters to shake-down their customers with rates that are 0.50 to more than 1.00 percentage points above the true market.

It is truly stunning that 4 in 10 mortgagors accept what their lender offers without even negotiating. And believe me, lenders know this stat. They love it. They rely on it. It’s no secret that people hate paperwork and yield to complacency. So lenders systematically pick renewers’ pockets to the tune of hundreds of millions of dollars a year in extra interest.

This is why effective rate reconnaissance matters. The Spy is Canada’s only source to publicly monitor 350+ mortgage providers and more than 3,200 mortgage rates four times a day, every day. Use this intelligence to your advantage. Every dollar you save in interest is one more dollar you can pay in principal.