An Idle Bank of Canada 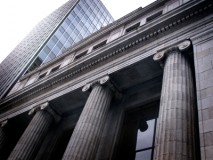 If you forgot about the Bank of Canada rate meeting yesterday, you’re one of many. Nobody made a big deal about it because nobody expected anything earth shattering from Poloz’s lips.

The takeaway is that prime rate remains stuck at 2.70% and it could stay that way for months. The Bank did lift its Canadian growth estimate, but this comes on the heels of private economists and the IMF cutting their growth estimates.

Who should you believe on growth? Believe no one, save for the bond market, which is the only rate predictor that incorporates all available information. Right now the bond market is telling us that inflation expectations (the key driver of interest rates) are neither too hot nor too cold.

Oil made a 4-month high this week. You know what that means. It means there’s a glimmer of hope in the oil patch, a sector of Canada’s economy that’s been beaten with a bag of nickels.

This little oil upswing is not the least of reasons that bond yields are perking up. Oil and rates have had an intimate connection, as you can see in the chart below. Consequently, if we see oil sneak back to $50 a barrel, longer-term fixed rates should crawl about 10-25 bps higher. 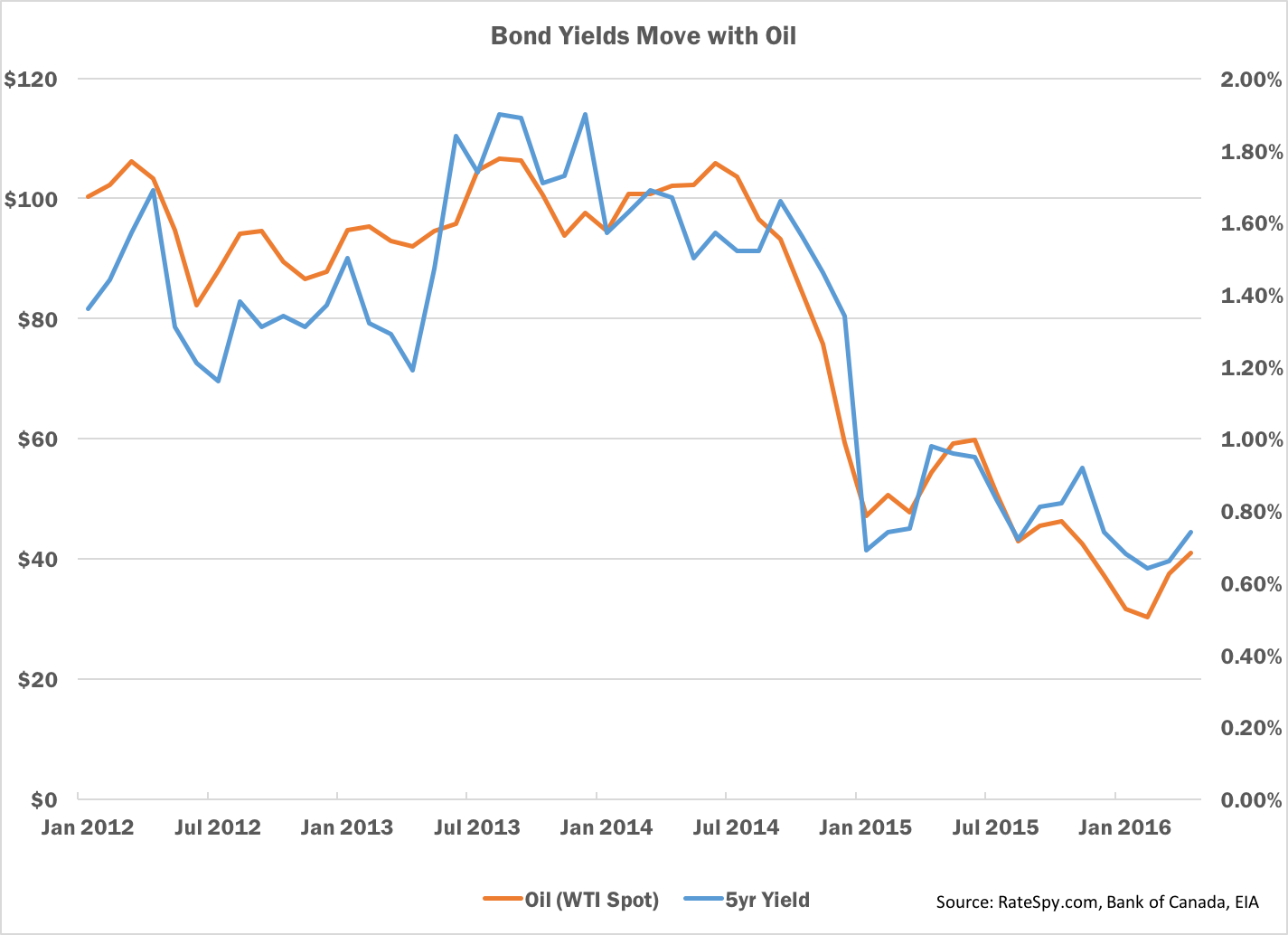 Speaking of the 5-year bond yield, keep a keen eye on the 0.81% mark. Yields, as readers know, are a leading indicator of fixed mortgage rates. The 0.81% level is special because the market has tried to break it three times and failed. The 5-year hasn’t closed above that mark in four months. If it does—for more than a few days—fixed rates could jump a bit. 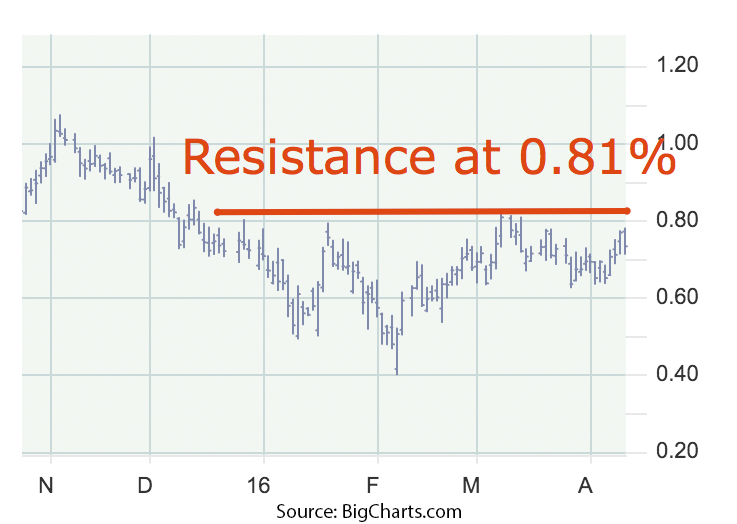 Of course, any such bond yield moves will have limited impact on variable mortgage rates. Variables are in a holding pattern, with only slight improvements of late.

For over a quarter century, interest rates have been in a once-in-a-lifetime downtrend. With rates approaching 0%, that trend is nearing the end of the road. Rates can always fall below zero, but only so far. Eventually investors tire of paying governments to hold their money.

Arguably the most likely scenario is that rates go sideways from here, with notable dips and spikes along the way. But if you look at this long-term chart you’ll notice something significant. Rates can and do surge, for a few years at a time. Those upswings have been getting smaller and smaller, but they shouldn’t be dismissed. 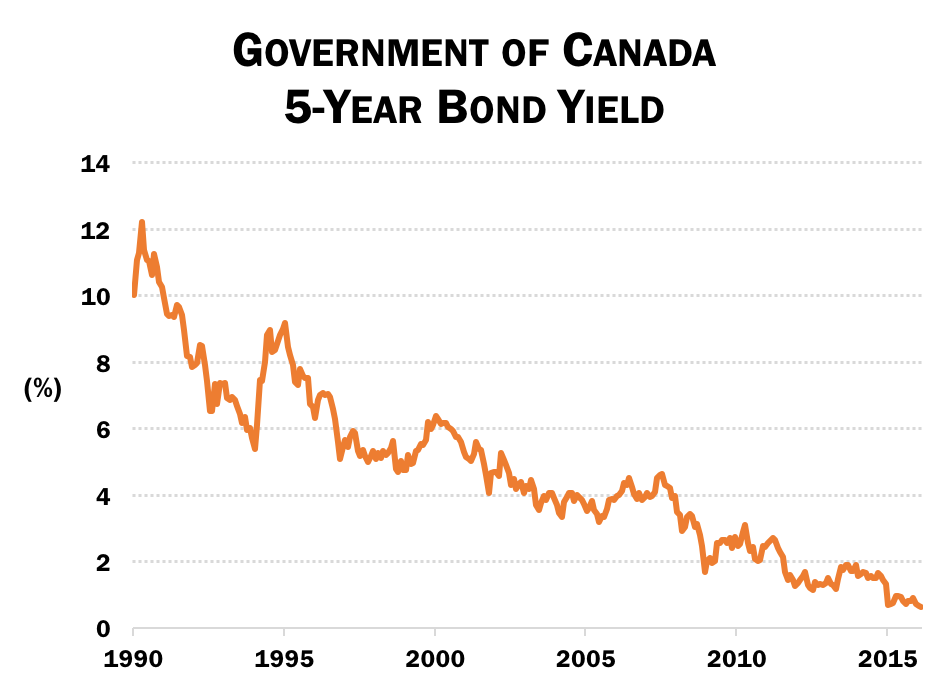 While not a prediction, the potential of a rate rebound is a fact. Such a move would push many borrowers into higher rates precisely when their mortgage renews.

That is particularly true for people choosing shorter terms, since these folks have to renew more often. Prudent borrowers should ask themselves if they can afford (up to) a 25% jump in their payment. Anyone getting a two- or three-year mortgage—which are selling like hotcakes at the moment—must bear this in mind.

Right. Now list for me all the things that are not factored into a lender’s debt-ratio test. Let’s see, there’s hydro, cable TV, Internet, child care, one-half of condo fees (if you live in a condo), gasoline and/or public transit, auto care, food, health care, home maintenance, clothing and education to name a few. And let’s not forget taxes, debt incurred after the mortgage closes and saving for retirement!

Mark these words. If rates ever do rocket two+ percentage points higher, those surveys that predict budgetary hardship for 1 in 5 borrowers will be right on the money.

One other point: Not all lenders qualify variable and 1- to 4-year fixed borrowers based on the posted rate. Some, like certain credit unions, use the contract rate to determine your hypothetical payment (e.g., a rate like 2.29%, as opposed to 4.64%).

The point is, while significantly higher rates won’t be knocking on our door this year, inflationary threats can come out of nowhere. In that event, the Bank of Canada and the bond market would respond by taking rates higher for several quarters. The resulting rate burst could easily make your mortgage renewal uncomfortably more expensive.

Of course, you could always take a 5-year fixed at <= 2.49% and not fret about rates for five years. Now you know why 51% of Canadians do just that.