If you’ve watched mortgage rates for a long time, you know how unnatural this is.

In fact, that difference (spread) is the lowest it’s been in decades, based on deep discount rates offered to well-qualified borrowers. 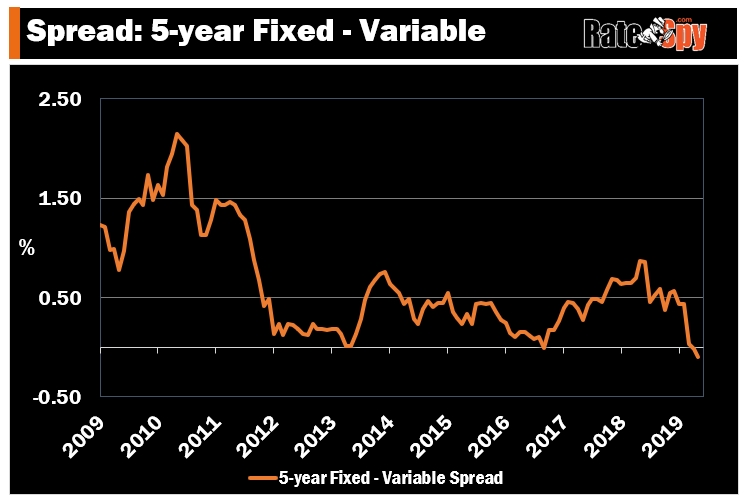 The chart above shows the spread between discounted 5-year fixed rates and discounted 5-year variable rates. It’s as far back as our monthly data goes. But if you compare today’s yield curve inversion (as measured by the 10-year bond minus the overnight rate), Canada’s rate abnormality quickly becomes apparent.

To see how warped the market really is, we looked back in time to see how the fixed-variable spread reacted in prior yield curve inversions. Here’s what history shows.

Note: This data is based on the lowest closed 5-year fixed and variable rates reported publicly by rate aggregators (Cannex or Fiscal Agents) at the time.

As you can see, we’re in rare territory. We had to go back to the year before the brutal 1990 recession to find a negative fixed-variable spread as big. If you find that kind of spooky, so do we.

The bond market is pricing in a Bank of Canada rate cut by March 2020, and it’s not hard to understand why. But it is hard to take a chance on a variable that’s priced at least 10-15 bps higher than a “safe” 5-year fixed. (The lowest nationally available variable is 2.84% versus 2.69% for a 5-year fixed).

On the other hand, not doing that may cost you, says the guy who wrote the book on fixed vs. variable rate research. “Remember the roulette wheel analogy,” says York University professor, Moshe Milevsky. “Approximately 80% of the time variable beats fixed. Period.”

Trying to outsmart the market based on what’s going on today may be ill-advised, he suggests.

But if that doesn’t give you confidence, maybe hedging your bets with a shorter-term will. At least then you can refinance into a lower rate if the bottom falls out like the bond market omens. And, at the same time, you’re protecting yourself for two to four years if Canada’s inflation rate defies all logical projections and soars near/above the BoC’s 3% ceiling. (Inflation expectations are the #1 determine of mortgage rates.)

But, as always, we must stress what should be obvious but often isn’t. Rate is not the only decision criterion. Before deciding if you’ll tempt fate in a short-term or floating rate, know the rest of the fixed vs. variable pros and cons.